The two swirling topic this NFL season off the field has been that of concussions and team re-locations. There has been a rising movement toward owners wanting to get a team or perhaps two in Los Angeles. This speculation has slowly been becoming a reality as the city will likely be home to two teams next season, whether that be the Chargers, Raiders, and/or Rams.

The final home games of the Rams and Chargers had somber feels to them, with fans not knowing if it will be their final time seeing their team.

Last night, that time came for the Oakland Raiders, and the fans weren’t taking any chances. In true Raiders fashion, Oakland fans began tearing out seats from the stadium, which we still aren’t sure how this was accomplished with their bare hands.

Whether or not it was the last game didn’t matter to this Raiders fan: 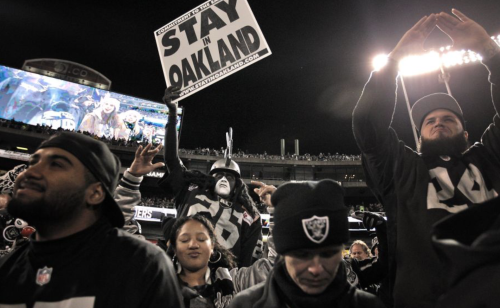 The team sent it out in style with a 23-20 win over the San Diego Chargers.