The excuses have begun now. On Sunday, the Panthers came out swinging on the Seahawks jumping to an early 31-0 1st half score. Everybody was shocked, whether you were a fan of either team or not. Nobody saw that coming. Some Seahawks fans seem to think the early start was the sole reason for their team losing and being eliminated.

The Seahawks have played 4 playoff games at 10am under Pete Carroll. They have zero first half points in those four games.

@zjwhitman wondering – what is the records for NFC West teams playing 10am games? Is it happening only to Seahawks? 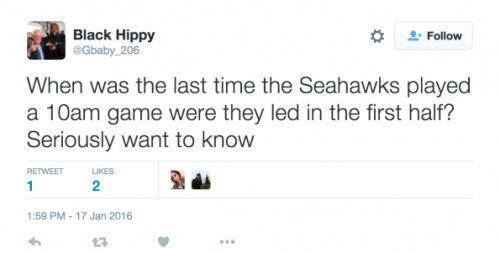 So the @Seahawks had to play 10am pt so the damn @ufc can have free fight night on @FS1. #Ihateyou

I have thought about it and I believe the seahawks lost because of the 10am start.

When will the @NFL understand the disadvantage of west coast teams having to play at 10am PST? @Seahawks#GoHawks#CamSucks — Stevenator (@SteveParkerLive) January 17, 2016