Lets just say Brian Hoyer is the most hated man in Houston right now. The ringleader of SIS could walk up into the city and they wouldn’t even blink an eye. After giving away 4 turnovers in the opening game of the 2015 NFL Playoffs, it;s safe to say the Texans lost because of the struggling QB. The man is a former Brown, did the Texans not see this coming?

Texans fans put Hoyer on blast during and following the embarrassment after the loss, and here’s some of them we’ve found in the thousands upon thousands of social media hate mail this man has been getting.

My thoughts on Brian Hoyer pic.twitter.com/458faxbTfo 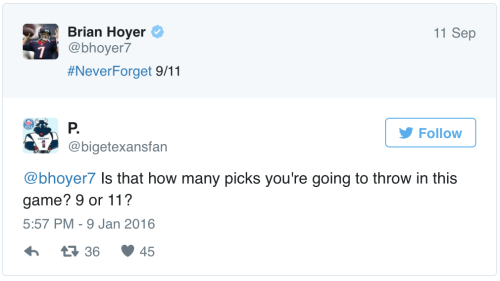