We’re only a few months away from Madden 16 being released and the buzz around the game is already growing. Football fans have a never-ending appetite for the game and expect it to improve with each edition.

EA Sports is constantly working to make the game as realistic as possible, and if you’ve seen the graphics the last few years it’s clear that they’ve been successful.

Along with the visual components of Madden, the realism of the game depends on how accurate the player ratings are. For the most part EA is spot on with this, but there are some players, even great ones, who need to be taken down a notch.

Here are 10 NFL players who need a downgrade in Madden 16. Matt Forte is still a great running back who will be drafted high in most fantasy football leagues. Not that many running backs have the longevity that Forte has these days which makes him a rare talent that the Bears are lucky to have.

Still, Forte’s 95 rating in Madden 15 is much too high. Something in the high 80’s seems more appropriate. 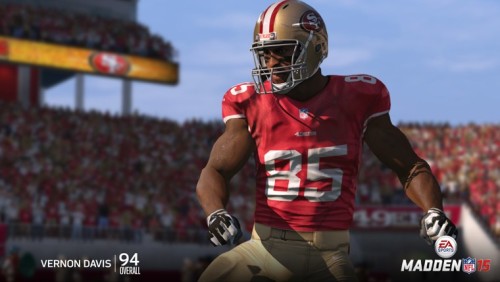 Vernon Davis, like the rest of his 2014 49ers teammates, experienced an abysmal season as San Francisco missed the playoffs after three straight NFC title game appearances and one Super Bowl appearance.

He only caught 26 passes and two touchdowns, meaning that his 94 rating in Madden should decrease by quite a bit. Percy Harvin has blazing speed but hasn’t been able to stick any where in the league. Concussion issues have plagued him throughout his career as well as brush-up’s with teammates. Lets face it, Seattle traded him to one of the worst teams for nothing, and then went on to win the Super Bowl; talk about a slap in the face. Now with the Bills it will be interesting to see what Harvin can do, but it shouldn’t come with a 90 rating on Madden 16. Russell Wilson is a phenomenal, athletic quarterback who is a fitting leader for the Seattle Seahawks. Still, rating him at 93, the same as Tom Brady, is a little drastic. Lets be honest, a majority of the Hawks success is due to their stout defense and threat at the RB position with Lynch. Something like 90 or in the high 80’s seems more on par with his true abilities. Longtime Niners running back Frank Gore has switched teams for the first time in his career as he heads to Indy to play for the Colts. Gore is a solid back but years of physical abuse on the gridiron have worn his body down. His current 90 rating should be lowered by a few points, especially when you look at where some of the other tailbacks in the NFL are ranked. Manziel’s 77 rating wasn’t that good to start with but that doesn’t mean he even deserves it. Johnny Football might improve his game soon but as of now he should be rated in the low 70’s if not 60’s. Until he proves otherwise, he’s a 2nd string QB on one of the worst teams in football at best. Richard Sherman is arguably the best cornerback in the game and should be ranked in the high 90’s without question, but only two other players in the game have 99 ratings. Richard might not like this but he should be lowered a few pegs in Madden 16. Despite the constant shadow of being drafted #1 the same year Aaron Rodgers went 24th, Alex Smith has proven to be a solid NFL QB. The Chiefs leading man has fit into Andy Reid’s system well but a 89 rating is a bit high, especially when you consider that it’s greater than Andrew Luck’s overall number. Andre Johnson signed with the Colts this offseason and will get to terrorize his old team in the same division, the Houston Texans. He spent his entire career there and now looks to finally win a title with Andrew Luck on his side.

We aren’t saying that Johnson still isn’t an elite wide receiver, but the 33-year old should definitely be lowered from 95. Peyton Manning is one of the greatest quarterbacks to play the game of football and will be a first ballot Hall of Famer, but does he deserve to be tied with Aaron Rodgers for the highest rating of any QB in Madden? The answer is clearly no.

You can’t blame EA Sports for putting Manning so high after his record breaking 2013 season but things seemed a little off last year. The Broncos are still in good shape with Peyton at the reigns but his time in the league is starting to wind down.

Feel free to comment at the bottom of the page whether or not you agree with these ratings!