CHICAGO, IL – The Cleveland Browns made unprecedented move last week, trading the #2 overall pick to the Philadelphia Eagles for a boatload of picks, moving back to the #8 spot, the first good move by the team’s front office in history.

Today, we now learn what the motives were exactly behind that move. The Browns have had their eye on a punter out of ITT Technical Institute ever since the changed out management positions at the end of 2015. As of Thursday night, that punter is a Cleveland Brown. Electing to opt out of the 2nd spot in order to try to avoid the embrassment of drafting yet another bust, the team felt like it would be safer to draft one with a later pick, so less people would remember.

The pick marks the highest draft of a punter in the NFL’s history, ahead of Bryan Anger of the Jacksonville Jaguars.

During his 2 years getting his degree at ITT Tech, Bill Gumper averaged 4 yards per punt of his crumbled up trash to the pale across the room when he was too lazy to get up from his gamer chair. “It was the consistency of Gumpert that really caught out eye,” said Browns GM Sashi Brown. “We were sure teams 9-14 wouldn’t snatch up this gem, but we weren’t sure if another team would take him before we were able to use our second pick, so we agreed to pull the trigger with the 15th after trading for the pick with the Titans.”

The Browns also noted that Gumpert has told scouts he’s never consumed alcohol nor goes out to party, eliminated to the off-the-field risks, one’s that Cleveland are all too familiar with. “If he has the same talent as Johnny Manziel yet no issues for us to loose sleep over? He’s our guy.”

The punter stands at a towering 5’9″ and comes in at 320 -pounds, running a 17.31 sec 40-yard dash and a vertical leap that went unregistered by scouts.

Gumpert was rated as the 1,435th rated prospect by Todd McShay and couldn’t fit on Mel Kiper’s ‘big board’.

No word yet on if the punter is expected to be the Week 1 starter with the Browns. 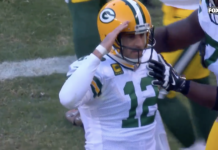