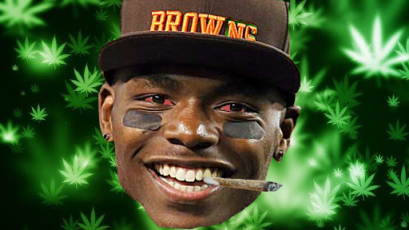 CLEVELAND, OH – Browns fans haven’t been this happy since…well, not sure we have anything to compare this with.

Gordon met with league commissioner Roger Goodell in New York Monday morning to hear Gordon out on reinstatement options after failing his most recent test just days before his last meeting was scheduled.

According to sources with inside information on the meeting, Goodell expressed displeasure with Gordon’s behavior and inability to stay clean with such a bright future, and then told Gordon the news that he would allow the WR to play this upcoming season and here on out.

Gordon was provided with his reinstatement papers and in a spontaneous furry of joy and excitement, rolled his papers into a celebratory blunt.

After what was only going to be a proposed 4-game suspension for Gordon, it is now being reported that Gordon will miss the entirety of the 2016-2017 NFL season.