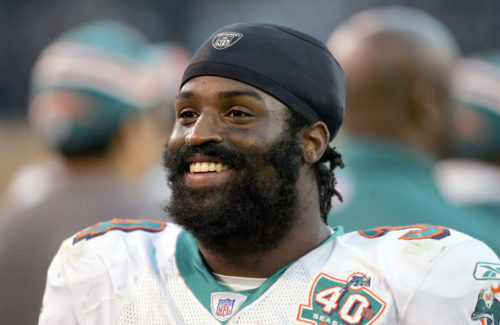 Ricky Williams and pot will forever be synonymous.

The former Heisman Trophy winner who amassed over 10,000 yards in his NFL career will forever be remembered for his relationship will marijuana and how it ultimately put a hold to and eventually ended his career.

In light of talk about whether or not the NFL should do away with drug testing for the drug, Williams appeared on Bill Simmon’s new HBO show and claimed he would be a hall of famer if weed was legal during his career, “For sure. No doubt about it.”

Williams said he would have been more focused on football if he hadn’t been worried about NFL drug tests. He also felt, after his failed drug tests became publicized, that he struggled to deal with the attention he got.

“I look at the amount of stress and things that distracted me from playing football surrounding cannabis,” Williams said. “Also the negative media coverage I got really tarnished my image.”

It’s impossible to say what might have happened if the NFL didn’t ban marijuana, but Williams did miss two full seasons because of issues related to his marijuana use, as well as parts of other seasons. It’s certainly not impossible that Williams could have had another 3,000 rushing yards if he’d been allowed to smoke pot, and the only player in NFL history who has 13,000 rushing yards and isn’t in the Hall of Fame is LaDainian Tomlinson, who is not yet eligible.

Williams may just be right that the NFL’s marijuana ban is what kept him from a Hall of Fame career.