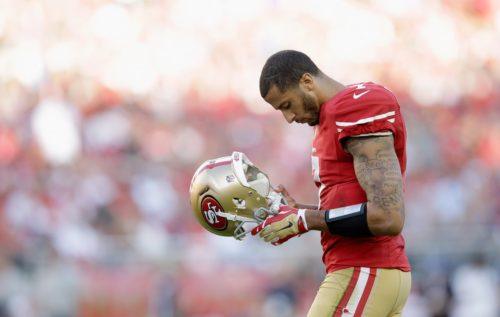 Colin Kaepernick’s decision to sit out during the National Anthem being played prior to start of NFL games has stirred a lot of controversy but it will not stop Kaepernick to continue to sit out.

I am not going to stand up to show pride in a flag for a country that oppresses black people and people of color. To me, this is bigger than football and it would be selfish on my part to look the other way. There are bodies in the street and people getting paid leave and getting away with murder. …

This is not something that I am going to run by anybody. I am not looking for approval. I have to stand up for people that are oppressed. … If they take football away, my endorsements from me, I know that I stood up for what is right.

On Sunday, Kaepernick met with the media and reiterated that he’ll continue the protest of the national anthem, per Can Inman of Bay Area News Group:

Mike Rosenberg of the Seattle Times provided a direct quote from Kaepernick of an experience he had with racial injustice:

Kaepernick had guns drawn on him by cops for being one of the only black guys in his town https://t.co/6OvUspKsuipic.twitter.com/RTARYdYBum

49ers head coach Chip Kelly has yet to name a starting quarterback for the 49ers Week 1 game vs Los Angeles Rams as Colin Kaepernick and Blaine Gabbert will continue to duel it out.