The number one topic involving the NFL in recent weeks has been that of the steep drop-off in ratings. That of course applied to the number of eyeballs fixed on the league’s games by home viewers. That doesn’t take into account the number of fans actually showing up to the stadiums for the games, which is declining as well.

The NFL has been working for years on developing a better “fan experience” to incentivize fans to come to games rather than watch it at home. One of the many reasons why fans have stopped physically attending games is the amount of violence at NFL stadiums. Families simply are not as inclined to take their family to a place which has turned into the opposite of a family environment.

“If you are concerned about bringing your family to a game, then that is an issue,” said Amy Trask, a former executive with the Raiders who has served on the NFL’s security committee. “It’s not just an issue for one team, it’s an issue for all 32 teams. The teams know this. The league knows this.”

The Washington Post conducted an in-depth study examining police data from all 32 NFL stadiums from the past five seasons. They found though totals fluctuate from year to year, they have trended slightly upward on a per-game basis since 2011. Last year, 6.34 arrests per game were reported league-wide during the 17 weeks of the regular season. On the 10th week of the season, 126 arrests were made — the second-highest total during the five-year period. That was the most since 129 arrests were made in Week 14 of 2012.

Last October, a man was shot outside a Dallas Cowboys game at A&T Stadium and later died. A year earlier, a man at Levi’s Stadium in Santa Clara, Calif., home of the 49ers, was beaten so badly, his attorney said, the man now suffers from permanent seizure activity. In 2013, a 30-year-old man was beaten to death in the parking lot at Kansas City’s Arrowhead Stadium.

Possibly the most shocking data collected, was the findings from the San Diego Chargers between 2011 and 2015. Police made 24.58 arrests per game. Not far behind, 21.96 people were apprehended in New York and and Oakland predictably came in at third with 17.78 and Pittsburgh bringing up the rear with 16.75. 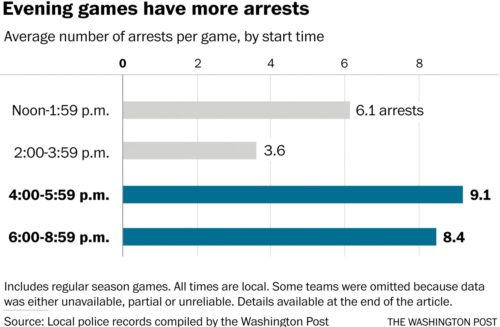