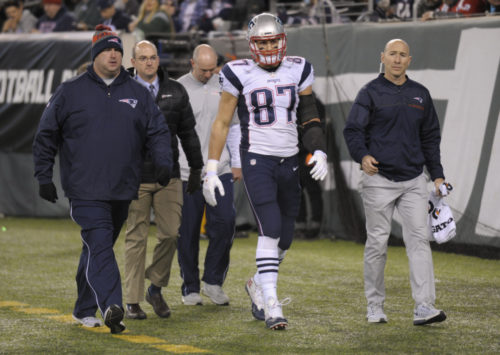 Patriots all-pro tight end Rob Gronkowski was forced to leave Sunday’s game against the New York Jets with a back injury.

Gronkowski, who was questionable entering Sunday’s game with a chest injury, had to leave the field for the locker room after hitting the ground hard chasing a deep ball from Tom Brady during the third drive of the game.

That injury, which has sidelined Gronk during practice this week, is now being diagnosed worse than previously expected, requiring surgery which could sideline the tight end for the remainder of the season.

More on Gronk from #NFL sources: Suffered a ruptured disk vs. #Seahawks, surgery in L.A. Expected to be out eight weeks.

The procedure would mean the 3rd herniated disk surgery for Gronk.

Quarterback Tom Brady’s reaction to seeing him go down with the injury Sunday said it all.

The Patriots, even standing at 9-2 atop the AFC, have been relatively struggling in pass weeks, narrowly escaping with a win last week in the game which Gronkwoksi went down with an injury.

The injury-plagued TE missed the first two games of the season with a hamstring injury, amounting 25 receptions for 540 yards and three touchdowns since, leading the NFL with 21.6 yards per catch (SI.com).

Fortunate for the Patriots, they have another elite tight end in Martellus Bennet ready to fill the void.