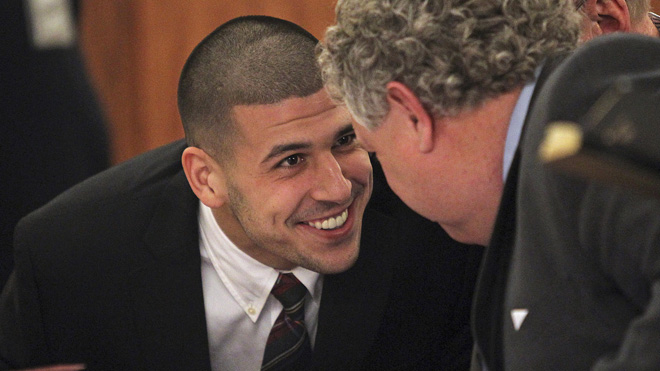 Aaron Hernandez was in the news today. No he did not kill another person, but instead was found not guilty in a double murder he was believed to be the gun man in.

What many football fans failed to realize is that the former Patriots tight end is serving a life sentence for another murder, regardless of the outcome of the trial which concluded today.

Aaron Hernandez is a Free Man 😕

Marshawn Lynch to the Raiders and Aaron Hernandez is a free man….Crazy day in the league.

Welcome back to the @NFL Aaron Hernandez https://t.co/RwxomdcQjE

Can’t fucking believe Aaron Hernandez wasn’t found guilty. He’ll be back in the NFL & killing people before you know it

So uh, Aaron Hernandez to the Bengals?

aaron hernandez to the niners, make it happen. @49ers

Aaron Hernandez about to be back on my fantasy team!

Aaron hernandez found not guilty , @Patriots pick my manz back up so we can go get another one

Aaron Hernandez gonna be back in the NFL this upcoming season watch. 👀

@Patriots so, you gonna sign my boy Aaron Hernandez back? 😊