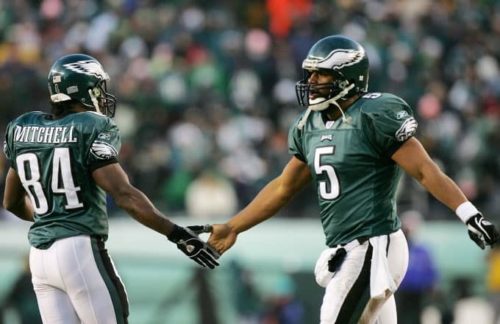 On Thursday, J.R. Smith of the Cleveland Cavaliers committed one of dumbest mistakes in sports history when he dribbled out the clock in a tie game to close out regulation of Game 1 of the NBA Finals.

The Golden State Warriors went on to defeat the Cavaliers 124-114 in overtime to take a 1-0 series lead and the internet could not stop talking about Smith’s hilarious mistake.

Smith claimed he knew the game was tied, despite Cavs coach Ty Lue saying he thought Smith figured the team was up when he collected an offensive rebound with 4.7 seconds left before dribbling out the clock and preventing the Cavs from getting a shot off.

LeBron James claims he didn’t know what Smith was thinking he is not JR and refused to throw his teammate under the bus for the play or add any additional blame on him for the tough loss.

This caught the attention of former Philadelphia Eagles WR Freddie Mitchell and decided it was a good time to compare James to McNabb, applauding James’ leadership while ripping McNabb’s lack of leadership:

I gotta respect @KingJames for standing up for his teammate. McNabb would never do that for me. @espn

Mitchell only played four NFL seasons from 2001-2004 and had just 90 catches for 1,263 yards and five touchdowns for his career.