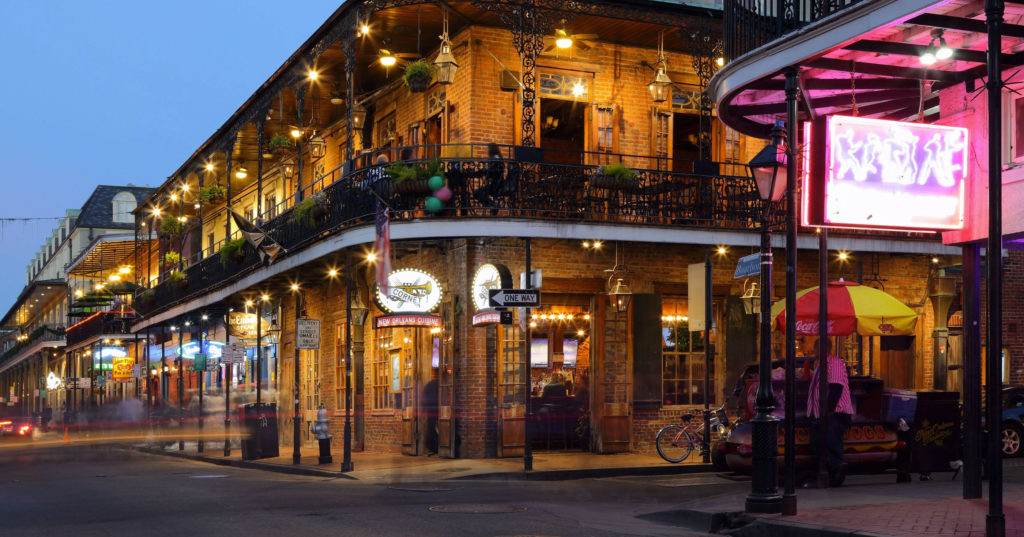 The saltiness in New Orleans has reached a new peak.

After being stripped of their trip to Super Bowl LII on the back of an admittedly egregious no-call benefiting the Rams, New Orleans is deciding to pretend like this years Super Bowl simply doesn’t exist.

The city’s famous Bourbon Street is the hottest spot to catch the big game annually, but come this Super Bowl Sunday, you’ll have a hard time finding it on any television.

Some New Orleans bars and restaurants have decided they won’t partake in the Super Bowl festivities, refusing to broadcast the game.

Some of those establishments have decided to replay the 2010 Super Bowl where the Saints beat the Colts 31-17, while others are even hosting parties specifically intended to boycott the Super Bowl.

Per NOLA.com, here’s a list so far of bars and restaurants boycotting the game and holding other events in it’s place.

The restaurant will show Super Bowl XLIV all afternoon and has created a “special Saints daiquiri” for the day.

Customers asked, so the bar is hosting a Black and Gold Super Bowl party, showing Super Bowl XLIV. It is a potluck, but, if the weather cooperates, the bar may fire up the grill.

On Super Bowl Sunday, from 11 to 3 p.m., the Magazine Street location is partnering with chef Amy Cyrex Sins to create an Anti-Super Bowl Party. Details are being finalized, but expect to watch the Super Bowl XLIV, enjoy a Choppa style dance-off and take out your frustrations at a “Dunk the Ref” tank, with dunk ticket money going to an as-yet-unnamed charity. The party includes drink specials, too. Guests who make a donation to Second Harvest Food Bank get $1 off a hot dog. Stay tuned for more details on the Facebook event page.

The Anti-Super Bowl Party starts at 5 p.m. Adam Pearce from “The Voice” will perform. The event features free food and drink specials.

The owners haven’t decided quite yet, but as of Wednesday afternoon, the bar had a poll on Facebook page asking: “Homedaliens, we need your input! Should we show the (fake) Super Bowl with the Patriots and Rams or show the real Saints Super Bowl replay? Let us know!” The poll ends in eight days.

The restaurant’s Anti-Super Bowl LIII Party + All-Day Happy Hour will run all day from 11 a.m. to 10 p.m. on that Sunday. “We will not be playing Super Bowl LIII on February 3rd, however, we will celebrate the Saints with happy hour prices served all day,” the owners wrote on their Facebook page.

The bar plans to rerun games from the 2009 season when it opens at 11 a.m. It will screen the Saints victorious Super Bowl game during the broadcast of the 2019 game. Expect New Orleans themed food for sale. On its Facebook page, the bar assures viewers that “yes, you can still catch the Puppy Bowl here.” Watch the Facebook page for more details. No cover charge. The bar is open until 4 a.m.

This hotbed of Saints fandom will not show the “not-so-super bowl,” owner Cindy Wood said on the bar’s Facebook page. The bar will show the Saints victory bowl.  “I think everybody and all bars in New Orleans should not watch or show the (Super Bowl),” Wood wrote. “Let’s make the (Super Bowl) ratings the worst in its history. #Dontwatch.”

Another event planned includes the Cruisin’ for the Saints caravan. On Super Bowl Sunday, Saints fans are encouraged to dress in black and gold, festoon their cars in team colors and meet at the New Orleans Lakefront Shelter No. 1 at 9 a.m. A meet-and-greet is planned from 9 to 12:30 p.m. From 1 to 4 p.m., the group plans to ride to downtown. Then, the group will return to the lakefront and handout at 5 p.m.

Expect more events as business owners and fans get organized. Also in the works is a Boycott Bowl music festival in New Orleans on Feb. 3. Plans are tentative, but the festival, if pulled off, would benefit “New Orleans musicians, chefs, bartenders, and the entire service industry rather than the NFL,” according to the Facebook event page. Read more about that event here.