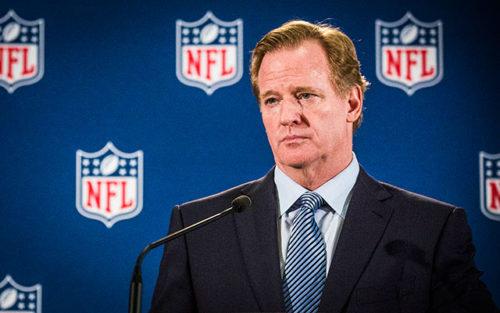 Roger Goodell has taken a lot of heat over the past few years, most of that stemming from the seemingly absurd lack of consistency and logic behind punishments handed down to players in the NFL.

It seemed to all start with the Patriot’s ‘spy-gate’ about a decade ago and carried over to ‘bounty-gate’ with the Saints, but the nonsensical justice system controlled by commissioner Roger Goodell shot into the spotlight with former Ravens running back Ray Rice, which we all know punched his wife in an elevator. That act which would have landed an average Joe years in jail, warranted a mear four-game suspension. The whole security camera tape debacle  which ensued also dug the commissioner into a hole. Most recently, we saw Goodell and the NFL mishandle the Adrian Peterson and Greg Hardy incidents as well.

The unjustness of these punishments where magnified when ones following including acts like a helmet-to-helmet hits, smoking weed, and ofcourse, ‘deflate-gate,’ came down with much harder suspensions and fines, an obvious “makeup call” for Goodell’s previous mishaps.

Beyond the notable instances, a slew of fines have been handed down by Goodell that seem senseless, ones heavily criticized by players and fans.

The way Roger Goodell and the NFL disciplines its players may see light coming soon, with the NFL Players Association and the NFL reportedly working towards a deal that would essentially strip the disciplinary ability away from Roger Goodell. The NFLPA has been understandably highly critical of Goodell for years now.

While traveling to the union’s annual meeting in Hawaii, NFLPA executive director DeMaurice Smith told  the Wall Street Journal Monday, “We’ve been talking about changes to the personal conduct policy since October and have traded proposals. We looked at the league’s proposal for neutral arbitration. There is a common ground for us to get something done.”

NFL spokesman Brian McCarthy also made a statement, saying, “It is an important area that deserves to be addressed thoughtfully and with full consideration for everyone’s interests — players, clubs and fans.”

Goodell has been able to rule on player discipline and also hear appeals since 2011, via the collective bargaining agreement which became effective in that year.

The commissioner labeled the process time-consuming last fall and said allowing himself to be removed from the process would enable him to shift his attention to other issues around the league.

According to Sporting News, The NFLPA has proposed using three neutral arbitrators serving as hearing officers, according to people familiar with the matter. That panel would consist of lawyers or former judges who have some background in football. Outside of Goodell, former NFL players Troy Vincent — the league’s executive vice president of football operations — and Merton Hanks — also a league vice president of football operations — handle player discipline. Former players Derrick Brooks and James Thrash act as appeals officers.

Smith would like to see player discipline managed without the involvement of the court system.

“It’s a player decision with what they want to do, but I can’t imagine there is any appetite to agree with any proposal that doesn’t wrap up all the litigation,” Smith said. “We can either continue to litigate or reach a collectively bargained conclusion.”

The matter will likely be sorted out in next week’s NFL owners meetings in Boca Raton, Fla.