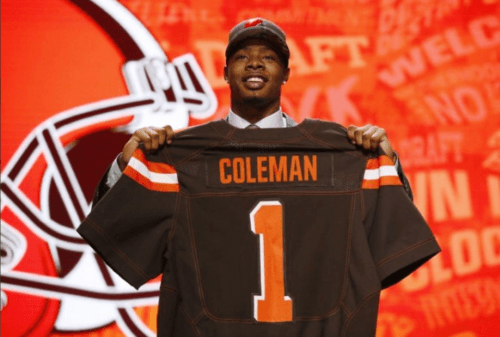 CHICAGO, IL – The Cleveland Browns seemed to have it all figured out.

Trade away their #2 pick with no need to draft a QB after signing RGIII, and then accumulate a plethora of draft picks.

The Browns changed strategies with their new management, try to gather as many draft picks as possible, rather than try to pick high as possible, and hope that player doesn’t result in a bust.

That plan is off to a bad start though. Early Friday morning at around 8:45 am, the Browns #15 pick Corey Coleman released a statement announcing his retirement from the NFL just hours after his career started.

Passing up on a lucrative contract and the possibility to suck with the Browns and then be a pro-bowler elsewhere.

A portion of his statement reads:

“I just can’t do it, it’s not worth it for me. Everyone in that green room came in knowing one of us where going to be sacrificed by the Browns, and the stars aligned and it ended up being me. For the sake of my name and career, I’m announcing I will go back to Texas and see if I can get a 9-5. Maybe the CFL. Who knows.”

Luckily for the Browns, they do have a good number of picks remaining in the draft, who will hopefully look for a playmaker no matter the position to help them become an actual NFL team.

The Browns have the 1st pick in the 2nd-round of the NFL draft which continues Friday night.