ARLINGTON, TX – Dallas rookie running back Ezekiel Elliott admitted to reporters that he was a tad “shellshocked” with the pace and intensity of practices during the first week of OTAs with the Cowboys. We suppose his mothers face when Elliott purchased a home for his mother with his first NFL paycheck was a different type of shellshocked.

Dawn Elliott and family are moving into the new house that resides in the St. Louis area, the same region where the Ezekiel grew up. 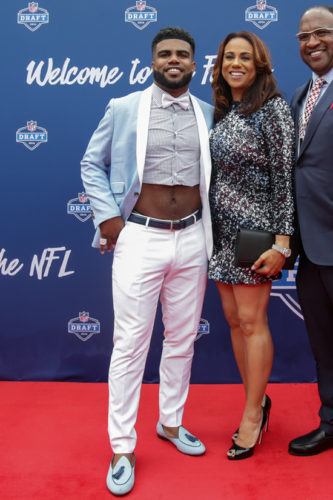 “It just feels really good to reward my mom,” Elliott told SportsDay. “The hard work she put in raising me and all she sacrificed, finally being able to do something for her for the first time feels really good.”

Elliott’s father told 5 Points Blue following Day 1 of the NFL draft, “Dawn and I sacrificed to provide a high quality education for Ezekiel and his sisters. We’re a middle class family trying to provide an upper class education and lifestyle for our children. Ezekiel went to private school his academic career through high school. So we didn’t drive the best cars. We didn’t go on fine trips or live in big houses. Most of our money went to the children. Our family vacations were AAU national track championships held in places across the country.” As the fourth overall pick of the first round, his rookie contract is very large. His four year deal is valued at $24.956 million and included a signing bonus of $16,350,066.