Nebraska opened up their 2016 season Saturday night vs the Fresno State Bulldogs. The Cornhuskers drew up and one play in particular that was unarguably their best of the night and will be the bets all season, even with the play drawing a penalty.

This offseason, the team’s punter Sam Foltz tragically died in a car crash that also killed former Michigan State punter Mike Sadler. The Huskers reportedly spent the months between the incident and the start of the season leanring how to cope with the loss along with getting prepared the the season and carrying on with their everyday l

Before the team’s opener, the Huskers gathered together in the tunnel to to remember why the were playing.

We play for each other.

We play for Foltz.

Early in the first quarter, the Huskers lined up with only 10  of 11 players, with Foltz’s position as punter empty to honor their fallen teammate. They subsequently waiting for the play clock to expire, and in an act of true class, Fresno State declined the penalty, allowing no loss of yardage.

The play came on the opening weekend in college football, but this might not get topped as the most beautiful thing we see on a football field all season.

We had to take a delay of game, weren’t able to get all 11 guys out to punt in time.

Missing one of them. pic.twitter.com/o3mzXQZqlO 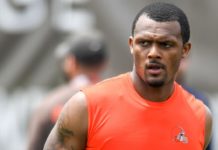