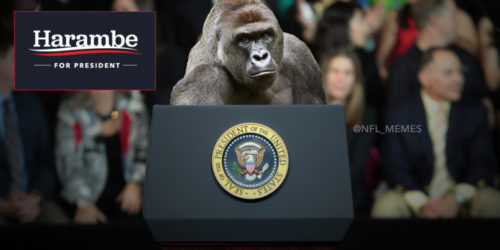 You may asked what the Unites States did to narrow 350,000,000 people down to Hillary Clinton and Donald Trump as their leader. Keep in mind, this is the same county that at the same time is still mourning the death of a dead gorilla.

By around 1:00am ET, the dead gorilla racked up more than 15,000 write-in votes for the presidency Tuesday on election night.

Before you ask how we got here:

15,000 fucking adults really woke their asses up, got dressed, travelled to a polling location, waited in line and voted for fucking Harambe

@tomshlIand your MEME was more important than someone’s basic human rights. Thanks.

Fun fact: the number of votes Clinton is losing Pennsylvania by is less than 1/5 of the 11000 votes received by Harambe in the same region.

This generation is something else.