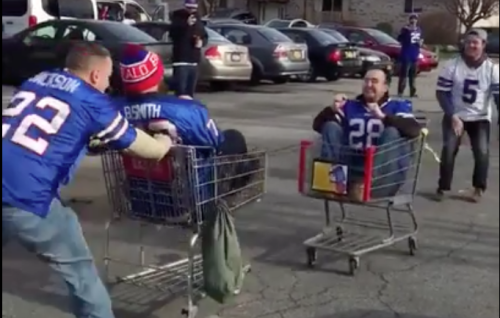 Could you imagine if the Bills made it to the Super Bowl? At this rate, the NFL would have to call in the National Guard. “Bills Mafia” as they’re known have gone from a somewhat crazy group of fans to a dumb, drunk group of fans to a totally awesome, and still sorta dumb, war against tables fanbase who has the whole NFL on watch.

New videos from epic-looking Bills tailgate parties have been popping up around the interwebs, and the newest one, a face off of a little bumper shopping carts, while highly intoxicated. Good clean fun!

Other Bills tailgate activities include, imitation Mexican wresting, RKO-ing dummies, body slamming, having public sex, and starting fires, but we’re thankful we can ad this one to the list.