Apparently Dak Prescott is so good, he doesn’t fear top-tier NFL defenses and all-out blitzes, but rather becoming the infamous ‘crying Jordan’ meme.

The Cowboys star rookie QB revealed in a recent interview with FOX Sports that his biggest fear is being photoshopped as one.

FOX: Have you talked to Tony Romo about how you’ll handle the Cowboys’ decision regarding who will start when he’s ready to come back? Or is it more, whatever the coaches decide — I will do?

Prescott: The players don’t worry about that. I think [Tony and I] do a great job of staying in the moment and figuring out what we have to do right now to help the team win every week.

FOX: When Tony went down in the preseason, was there a little “Oh … I’m about to be the starting quarterback of the Dallas Cowboys …” feeling of shock with you? Or was it just like – no going back now, let’s do this?

Prescott: Definitely no-going-back scenario. It was an opportunity that presented itself, and I want to make the most of it. Initially, when he went down, I didn’t think it was as bad as it ultimately came to be – so my initial thought was to go out there and get the job done, but after hearing the news and being named the starter, I knew it was an opportunity I just had to go get.

Prescott: Don’t really have one, but, since I’m in Dallas now – I’ll be cheering for the Mavericks.

FOX: Let’s say you’re walking back to your hotel late at night, 2 a.m., and make a wrong turn down a dark alley. Who’s the last NFL player you want to see waiting for you at the end of that dark alley?

FOX: Is there anything you fear more than getting Crying Jordaned by the Internet?

Prescott: Nothing. That is the worst. Definitely the worst. 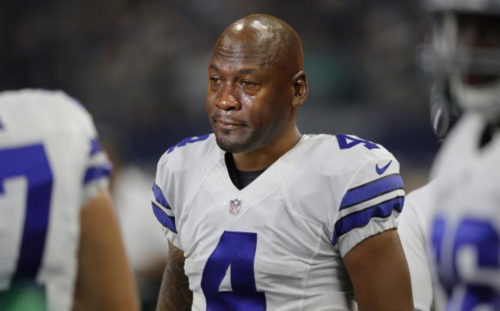 You can hear the full interview HERE