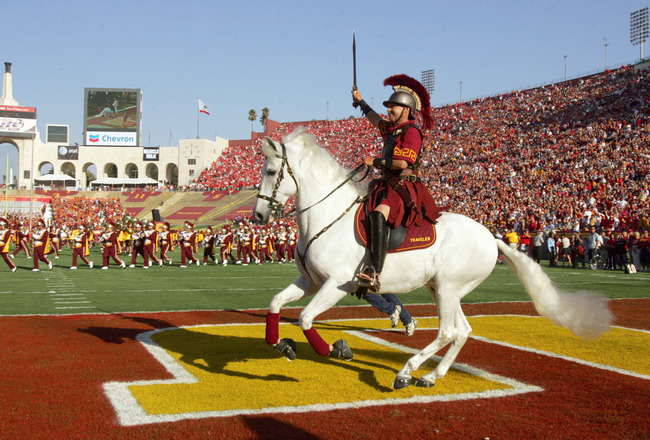 Via The Blaze – The co-director of the Black Student Assembly at the University of Southern California said at a rally denouncing the ‘alt-right’ gathering in Charlottesville, Virginia, that white supremacy hits close to home, student newspaper the Daily Trojan reported.

Saphia Jackson was referring to USC’s mascot, Traveler, the paper said. You know — that white horse that’s trotted onto football fields every fall carrying a guy dressed as a Trojan warrior.

It appears the beef is that Traveler’s name is similar to the name of Confederate Gen. Robert E. Lee’s horse, the Daily Trojan said. Lee’s horse was named Traveller (note the extra “l”).

The Black Student Assembly declined to comment to the Daily Trojan after last week’s rally and wouldn’t talk to the Los Angeles Times, either, which picked up the story.

A USC spokesman pointed the Times to the school’s website when the paper asked about the origin of the horse’s name.

“USC’s mascot horse is a symbol of ancient Troy. Its rider, with costume and sword, is a symbol of a Trojan warrior,” the website notes, according to the Times. “The name Traveler, spelled with one ‘l,’ is a common name among horses. . . . USC’s Traveler is and has always been a proud symbol of Troy. There is no truth to any other claims or rumors about its name.”

Stories have come up connecting the name of USC’s mascot to Lee’s horse, the Times said, but without attribution.

The widow of the man who trotted out the first Traveler for USC fans told the paper that the horse was already named when Richard Saukko bought him in 1958.

“The problem is this: maybe three weeks ago it was fine,” Pat Saukko DeBernardi told the Times about the overall issue that’s exploded since Charlottesville. “So now the flavor of the day is … we all have to be in hysteria. …. It’s more of a political issue. The horse isn’t political and neither am I.”

Those commenting on the Times piece seemed to agree that USC mascot supposed connection to Lee is taking things a bit too far.

“Seriously?” one commenter said. “This is idiocy at its best.”

“I’m liberal, but honestly making any sort of fuss over this is so stupid and pointless,” another commenter declared. “It has never stood for anything other than a Trojan mascot at SC games.”

Another added: “Give me a break, now the horse’s name is perpetuating racism? When we these activists just stop looking for reasons to justify their petty existence … non-causes. I hate SC (UCLA fan), but leave the horse alone and his/her name. It is part of SC and its tradition.”

There was precious little love lost between yet another commenter and the activists: “This is the type of thing that makes me hope those who even brought this up live utterly miserable existences.”