The Hitler reactions video is a classic. When you use it to characterize Roger Goodell as the Nazi leading, which frankly is not too far off.

If you’re unfamiliar, a version was made for Week 2’s game where the Patriots won their second game with Jimmy Garoppolo against the Miami Dolphins. Here’s is the version for the Pats win over the Texans, not with Garoppolo, but their third string QB, Jacoby Brissett. 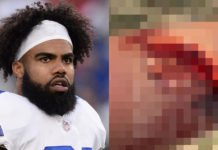