Details are pouring in regarding Miami Dolphins offensive lineman Richie Incognito’s history of bullying teammate Jonathan Martin. This is one of the more high profile cases of teammate abuse in sports, but it is certainly not the first. Here is Daily Snark’s list of the top 6 teammate bullying incidents in the world of sports:

Before he became a 3-time Pro Bowl running back, Stephen Davis was known for another reason; using his face as a punching bag for WR Michael Westbrook’s ground and pound attack. Apparently, Davis provoked Westbrook by repeatedly addressing him with a gay slur. Westbrook responded with a flurry of punches that would make Deebo from ‘Friday’ envious. But don’t just take my word for it, check out this video (fast forward to 1:03):

Hey Stephen, YOU GOT KNOCKED THE F*%^ OUT! If you wanted to see a suspected gay man deliver huge shots to the face like that today, you’d have to sneak into Kanye and Kim’s bedroom.

Aftermath: Westbrook was fined $50,000 and, despite promise, was out of the league just a few years later. Davis rushed for over 8,000 yards, 65 TDs, and played in Super Bowl XXXVIII. But despite these accolades, he’ll never shake off this brutal practice field beatdown. This was a rare occasion where the bully received justice. Not surprisingly, Westbrook eventually became an MMA fighter…. 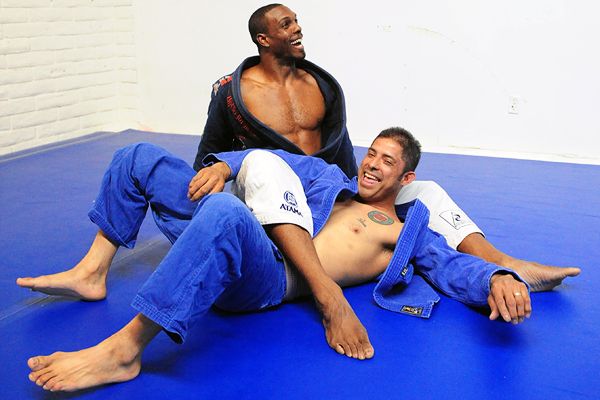 Mel Hall was one of the biggest dirtbags to play Major League Baseball. This is the same man who brought a loaded gun into the Yankees clubhouse. What was he protecting himself from, Don Mattingly’s unruly sideburns? One of his biggest scumbag moments was when he constantly bullied then-rookie Bernie Williams. The story goes that Hall taped “Mr. Zero” to the top of Williams’s locker to signify that he meant nothing to the team. One day Hall nearly brought Williams to tears by saying, “Zero, shut up,” every time Williams tried to speak. The more Williams tried, the louder Hall interrupted with repetitive chants of “Zero.”

I don’t know if I’m more offended by Hall’s appalling persona or his laughable inability to come up with a hurtful nickname. Mr. Zero sounds like some two-bit superhero in some low production filmstrip from the 1950s that they still show in schools to help children learn algebra: I can practically envision Bernie going home after games back then and writing angst-ridden songs about Mel to play on his guitar. Hey, it was the early 90s. Every musician with a pen and a guitar wrote overly emotional songs about their feelings:

Aftermath: Bernie Williams overcame his rookie season bullying experience and became one of the cornerstones of the Yankees dynasty of the late 1990s/early 2000s and a huge fan favorite. Mel Hall was run out of New York and exiled to Japan by Yankees owner George Steinbrenner who wanted to protect his young outfield prospect from any further harassment. Over a decade later, Hall was sent to prison for raping a 12 year-old girl. Classy. But he does get extra points for rocking this sweet Jheri Curl: Ol’ Mr. Burns attempt to field his company’s softball team with 9 major leaguers was a near disaster. Eight of those 9 were unable to play in the championship game versus rival Shelbyville due to various odd occurrences and ailments. However, the one MLB player that could play was right fielder Darryl Strawberry. Unfortunately, right field just happened to be Homer J. Simpson’s position. Strawberry did everything he could to drive Simpson out of the lineup, mainly by showing off his amazing athletic prowess in team practices. This included leaping 20 feet into the air to catch a fly ball before Homer could get to it:

At the time, I personally wondered in amazement how Strawberry got so high. Today, we all know his secret. Regardless, the ruthless Strawberry showed no pity for Simpson’s plight.

During the championship game, Strawberry slugged 9 home runs in a row with Homer miserably watching from the bench. Straw was due up in the bottom of the ninth in a tie game with the bases loaded. But despite his hot bat, master strategist Mr. Burns, perhaps the first ever Sabermetrician, decided to pinch hit for the left-handed hitting Strawberry with Homer because Shelbyville brought a left-handed pitcher into the game. Makes perfect sense.

Aftermath: We all know what unfolded from there…..

Winner: Homer, by a fractured nose

In a league filled with men conditioned for violence, linebacker Bill Romanowski was the NFL’s reigning sociopath. Affectionately known as “Romo”, the only choking this Romo was known for was wrapping his hands around the necks of people who crossed his path.

Romanowski was also known for vicious helmet to helmet hits, as well spitting on and kicking opponents in the face. But it wasn’t just his opponents that had to worry about Romanowski’s roid rage, his teammates had to proceed with caution around this animal as well. Especially backups and practice squad players, whom he had little respect for. During a Raiders practice, Romo was belligerently taking liberties with backup TE Marcus Williams during full pad drills, grabbing him by the facemask, jersey, and just about anywhere else he could get his paws on. Williams, not wanting to bow down to the school yard bully, pushed back. Things finally came to a head when Romanowski wanted to teach Williams a lesson in Darwinism, even brutal for Oakland standards. He grabbed Williams’ by the neck and facemask, ripping off Williams’ helmet while jerking his head back as he landed a Sagat-inspired Tiger Uppercut that broke the orbital bone in poor Marcus’ eye socket and rendered him unconscious. A teammate later said that the punch made “a really unnatural sound”. Probably as “unnatural” as the “supplements” Romo was alleged to have put in his body on a regular basis.

Aftermath: Despite a decorated, yet troubled, career that Bill Romanowski had, it was over after the season and he also had to pay Williams $340,000 in an out of court settlement. However, he did go on to land a job with ESPN, appear in a few movies, and write a book. Marcus Williams, on the other hand, never played again due to a badly damaged eye and post-concussion syndrome from Romo’s super punch. But if I’m not capturing the seriousness of Williams’ injury, maybe this pic will do the trick: 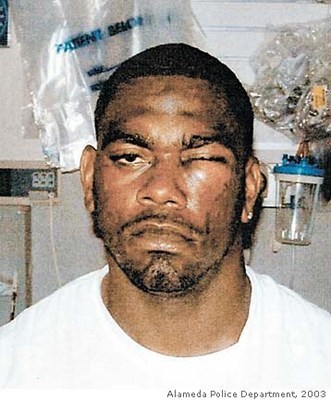 “Yo mama” jokes are the epitome of schoolyard bullying. There’s no greater level of antagonism than going all in on someone’s mother. Well in this case, Delonte West LITERALLY went all in on LeBron’s mother. It’s the ultimate teammate betrayal. It’s bad enough that LeBron had to deal with one of his teammates sleeping with his mother. But it’s an entirely different level of despair knowing that THIS teammate slept with his mother…. 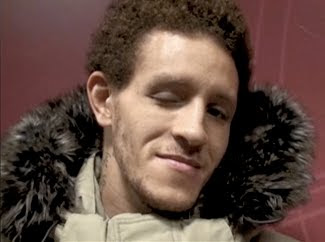 Oh, the bitter humanity! This is the type of stressful situation that will make you go bald:

Aftermath: LeBron James is the undisputed King of the NBA, the greatest basketball player in the world today. He has won two titles in a row and 4 MVPs. Yet even if he wins 10 titles and 10 MVPs, Delonte West will always be able to say to him, “LeBron, I gave your mother the pipe”. No accolades in the world can top that, it’s the ultimate trump card and one of the most ruthless form of bullying.

Winner: Delonte West
Final Score: Not 7, not 8, not 9 will ever be good enough to win here

Before we get to our #1 entry, here’s an HONORABLE MENTION that just missed the cut:

Just another classic case of a veteran superstar trolling a cocky, young up and comer after a poor performance, provoking the young cub to attempt to prove his strength only to get smacked down by the older, but still dominant lion and locker room alpha. If you don’t believe me, take a look for yourself…

Aftermath: LL Cool J and Jamie Foxx got into a real life fist fight which sparked an ongoing beef, partly as a result of this scene. Lawrence Taylor cut a car in half, mumbled a bunch of poorly acted lines, then went back to his trailer for more lines, but of a different variety. Al Pacino did his best Al Pacino impersonation and overacted his way to another easy paycheck.

Winner: Anyone who stayed home when this movie was in theaters.

Before Kobe Bryant tried to imitate yet another facet of his idol’s game by berating teammates, notably Smush Parker and Kwame Brown, and even punching Samaki Walker on the Lakers team bus, Michael Jordan paved the way as the original perpetual bully of the NBA locker room. We all know about Jordan’s legendary competitive streak in wanting to win at every endeavor he attempted. Clearly, this streak included wanting to be the very best at being the biggest douche possible to his teammates. Stories about MJ’s antics with his teammates range from not passing the ball to someone for the rest of a game for screwing up a play to not allowing Scottie Pippen to take the final shot in a game where Pippen was absolutely lighting it up. This was most likely Jordan’s reaction when Pippen asked to take the final shot:

One of the more ridiculous Jordan bullying stories is when he punched Steve Kerr during practice for no reason other than the fact that he was Michael Jordan and he felt like it. What was Steve Kerr going to do in retaliation? Exactly….. NOTHING. The odds that Chris Brown will actually beat up a man one day are better than Steve Kerr punching back His Airness. Ok, maybe not. But if Kerr swung back, he would have been on the next plane to Cleveland to play for the Cavs and, even worse, forced live in Cleveland.

When MJ played for the Wizards, he made Kwame Brown cry nearly every day by embarrassing young Kwame in front of the rest of the team. Smart move, Michael. Draft a 18 year-old with your #1 pick, a huge investment, and mentally break him down until he’s scared of his own shadow. Kwame was probably sitting alone in the corner of the Wizards locker room after every practice, muttering nonsense to a ball like Tom Hanks in ‘Cast Away’.

With all that said, there is no evidence that Jordan ever abused Bugs Bunny during a Tunes practice. But I did hear that he ripped Daffy Duck’s beak off after Daffy set an illegal screen on Porky Pig during a 5 on 5 scrimmage before the big game with the Monstars…..

Aftermath: Despite Michael Jordan’s abuse of his teammates, he drove them to become winners. In turn, he became arguably the greatest player in NBA history and one of greatest winners in American team sports. It seems like there was a method to his madness. Or maybe there wasn’t and he just thoroughly enjoyed torturing people as if he was Dick Cheney at a waterboarding party. Whatever was the case, it worked!