The catchphrase “Dem Boyz” has been going strong now for just about two years, and for anyone other than Cowboys fans, it’s been a cancer to fans’ ears. But with the Cowboys winning their ninth straight, Dallas is effectively, “Dem Boyz” right now, sitting pretty with the best record in the NFL.

Ezekiel Elliott is one guy maybe more responsible for that than anyone, and jokingly let Giants rookie Sterling Shepherd know on Instagram he shouldn’t be using their motto. 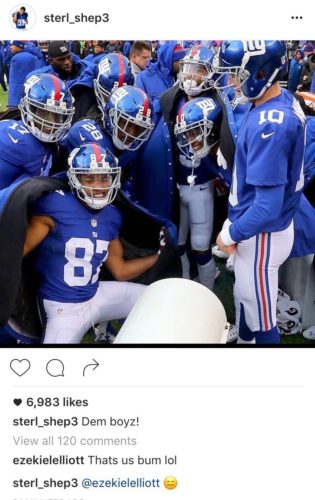 If there’s one argument Shepherd and the G-Men do have, it’s that New York handed the Cowboys their only loss of the season earlier this year.