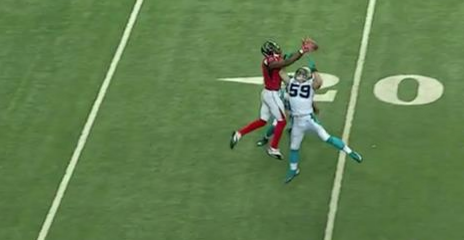 Julio Jones started the first quarter of this NFL season as the favorite for the MVP with his insane play. Today, he reminded us just how special he can be.

Falcons QB hit Matt Ryan for the 70 yard bomb, with Jones elevating above Panthers LB Dan Conner, and then sprinting to the end zone for 6.

Oh, and then he hit the dab…

Antonio Brown and Odell Beckham Jr. have risen above the figurative ‘Best WR In The NFL’ list, but this may be a catch that neither of them can make.

With that catch Julio Jones has 1,692 receiving yards this season, the 8th most in a single season in NFL history according to @STATS_NFL   — Matt Haley (@FalconsMHaley) December 27, 2015   The Falcons took the lead on their division rival Carolina Panthers 14-10 with the play, looking to spoil their undefeated season.