Ticket prices for the Washington Commanders preseason home opener at FedEx Field were so cheap, it would cost you more to get to the game than actually watching it.

According to Daniel Kaplan of the Athletic, the Commanders preseason home opener against the Carolina Panthers were selling for as cheap as $1.00:

By comparison, the average cost for a gallon of gas is $3.98.

The Panthers defeated the Commanders, 23-21. Carson Wentz made his debut as the Commanders quarterback, he went 10 for 13 for 74 yards.

Attendance at Commanders home games have been an issue for some time due to the lack of success of the team and how poorly managed FedEx Field is. 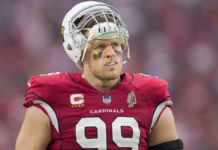